Gerald J. Davis is a trial attorney and Vietnam Veteran. He received his law degree from the University of South Carolina in 1997.Mr. Davis retired as a “State Trooper” from the State of South Carolina in 1994. During his tenure with the Highway Patrol, he investigated accidents and made arrests for various criminal and traffic violations. This valuable experience makes him uniquely qualified as a trial attorney to represent his clients with knowledge and skills gained from all sides of a wide spectrum of diverse issues. 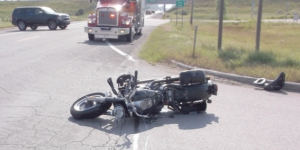 Motorcycle collisions, though not significantly more common than other types of accidents, are more likely to end in severe injury or death. According to the federal government, per mile driven in 2006, there were 35 times more deaths from motorcycle collisions than from car collisions. Because of these frightening statistics, it pays for motorcyclists to acquire knowledge about the most common causes of accidents and then use this information to decrease their level of danger.

The single most threatening situation for motorcyclists happens when cars are making left-hand turns. These accidents account for 42% of all collisions involving a motorcycle and car. Typically, the turning vehicle hits the motorcycle when the motorcycle is:

These types of accidents are frequent among two cars as well, but the motorcycle's smaller size makes it even less visible to the car that is turning. Motorcycles that pass cars within the same lane are even more exposed. Cars don't expect and are often overwhelmed by, such motorcycle maneuvers.

Lane splitting happens when a motorcycle drives between two lanes of stopped or gradually moving cars, generally in traffic jams. Lane splitting is a frequent cause of motorcycle accidents due to numerous factors:

-The proximity of the cars to the motorcycle

-The reduced space the motorcycle has to maneuver

If an accident happens while a motorcycle is lane splitting, whether the motorcycle or car is at blame depends on whether lane splitting is permitted in that state, the viewpoints of the police officer and judge on lane splitting and the actions of both the operator of the car and motorcyclist before the accident.

Speeding or alcohol use produce about 50% of the collisions concerning a single motorcycle. This statistic is not extraordinary, and these factors play a significant role in collisions between cars and other vehicles also. But, because motorcycles don't give much security to the rider, crashes concerning speeding or alcohol are much more likely to end in death or severe injury.

Collisions Between Motorcycles and Fixed Objects

Motorcycles clashing with fixed objects deems for 25% of motorcyclist deaths, but only 18% of car accident deaths. Because the motorcyclist is not enclosed by a box of metal and is prone to be thrown far and hard, such accidents are more dangerous when driving a motorcycle.

Motorcycles face greater hazards from road risks than cars do and other vehicles. Due to the smaller size and less durable nature of the motorcycle, irregularities or unexpected things in the road pose a severe safety threat to motorcycles.

Motorcyclists are at more danger for deadly or severe collisions on the road than are drivers. Still, motorcycle riders can enhance safety by being conscious of the probable causes of accidents and taking steps to decrease or avoid the risk, whether it be taking additional care when lane splitting, anticipating road risks or opposing the temptation to speed

Do I have a Slip & Fall lawsuit?

Thousands of people are injured each year (some very seriously) when they slip and fall on a damp floor, faulty stairs, or a rugged patch of ground. Sometimes the property owner is accountable for the accident, and sometimes they are not.

If you have been hurt in this way, first acknowledge that it is a natural part of living for someone to fall on or to trip onto the ground or floor. Also, some things put into the earth: drainage grates, for instance. A property owner cannot always be held liable for instantly picking up or cleaning every slippery substance on a platform. Nor is a property owner always subject for someone slipping or falling on something that an average person should expect to find there. We all have a responsibility to watch where we're going.

Nevertheless, property owners do need to be cautious about keeping up their property. While there is no specific way to determine when someone else is legally accountable for something on which a person slips or falls, cases usually take into account whether the property owner worked carefully to ensure that slipping or tripping was not expected to occur and whether you were negligent in not seeing the thing you fell on. Here are some standard rules to help you determine whether someone else was at fault for your slip and fall injury.

To be legally accountable for the injuries you sustained from slipping and falling on someone else's property, one of the following must be valid:

-The owner of the property must have created the spill

-The owner of the property must have known of the dangerous surface but did nothing about it.

-The owner of the property should have known of the dangerous surface because a "normal" person taking responsibility for the property would have identified and corrected it.

-The third position is the most popular, but is also less precise than the first two because of those troublesome words "should have known." Common sense often decides liability in these cases. Judges decide whether the owner of the property took proper care and if the steps the owner chose to keep the property safe were reasonable.

Any negligence claims often depend on whether the defendant responded reasonably. In defining a property owner's "reasonableness," the law focuses on whether the owner makes frequent and careful efforts to keep the property safe.

In almost every slip and fall case, you must determine whether your carelessness added to the accident. The rules of "comparative negligence" help measure your own reasonableness in going where you did, in the way you did, just before the accident occurred.

If you or your loved one are the victims of a slip-and-fall accident, contact Davis Law Firm Today!

Published in Firm News
Tagged under
Be the first to comment!
Read more...
Page 3 of 3

Information found on this Website is not, nor is it intended to be, legal advice.

You should consult an attorney regarding your individual situation.

EMAIL: This email address is being protected from spambots. You need JavaScript enabled to view it.

Disclaimer: Any results achieved on behalf of prior Clients in other matters, does not necessarily indicate similar results can be obtained for other clients.